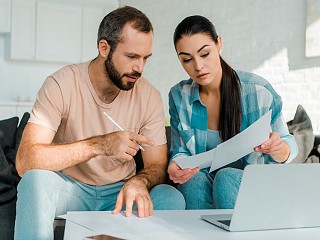 Michael and Liz were stressed. Even as they observed polite social norms on arriving at my office, I could see that something was up. Small talk lasted approximately 5 seconds, and then they told me.

“Liz has been made redundant.”

Not good. Not good at all. Like most people, Michael and Liz had built a life where they needed almost every dollar coming in to cover their expenses. And they were pessimistic about the amount of time it would take Liz to find a new job, despite her stellar education and career experience.

While Michael looked grim and concerned, Liz cried as she explained her fears for the future, which she was imagining as a fast slide from their current situation of paying a mortgage and not having to worry about money for basic survival, to living in the streets, dressed in rags, begging for food.

Even as she described it, she knew she was being dramatic. “That won’t happen, I know it won’t be that bad, but then I think that we might lose the house, and that feels like losing everything.”

It made total sense to me that Liz was worried about her family’s very survival. Money represents security and survival for many of us, partly because we project that on it, and partly because ever since money was invented it has been able to provide us with a way to obtain food, shelter and safety – our most basic needs.

One part of the work I do with clients is to help them build a financial safety net. The money in the ‘safety net’ account is for one thing, and one thing only: the interruption of income.

Liz and Michael had safety net savings. It didn’t comfort them they way they thought it would. Having to draw down on that account was freaking them out.

In my experience, no-one celebrates when they spend their Safety Net savings. They love having it - it gives them a feeling of security. They hate it when that security diminishes.

Your financial safety net can give you a little bit of breathing space, but as Liz and Michael were discovering, you can’t have enough saved in that account to cover all your expenses forever.

Luckily, there is much more to your personal safety net than just money. Michael and Liz and I worked through the following:

This is the safety net underneath our own safety nets. The thing that stops the apocalyptic vision that Liz had for her family becoming a reality.

Having to go on a benefit is not a bed of roses, though. On purpose. You need to have used all your own means of self-support; the level of income provided is designed to be less than the average wage; and dealing with government bureaucracy and rules is no-one’s idea of a good time.

One of the rules that Liz and Michael were not aware of was that WINZ will not take debt into account when assessing someone’s situation, which made it doubly important not to go into debt to maintain their current lifestyle. We agreed that If it came to this, Liz and Michael would get advice and an advocate – Citizens Advice Bureau is a good place to start.

The idea of benefiting from a charity rather than donating to one was extremely challenging to both Michael and Liz. They both fervently hoped it will never happen. But before Liz’s vision comes to pass, they do have this option – our communities have many organisations that want to help.

And many individuals want to help, too. The people who love you (or at least know, like and trust you) are also part of your safety net. The practical, informal support that friends, family, community, and business contacts routinely give each other should not be underestimated. When Liz and Michael started brainstorming all the people they knew who would be happy to provide a little support, either in terms of something practical or something intangible like emotional support or introductions, they came up with 20 names without even trying.

It’s not the money you’ve saved that gives you security. It’s your own ability to generate an income, to add value.

Your ability to generate an income is entirely dependent on your health, both mental and physical. Liz had been feeling hopeless the last few days, staying in and lacking the motivation to take care of herself. She decided to re-institute morning exercise for herself as a way to take care of both her physical and mental health, plus give her some routine in her day.

Liz had previously worked in the tourism industry. With the best will in the world, the chance of finding employment in that field in the next couple of years seems to be vanishingly small at this point, which is the main reason Liz has been so down. She agreed that the skills she had could find her employment in other industries, but she felt that employers would want someone who could say they had already done the exact job that they were offering. As a starting point, she decided to see a recruitment specialist who could re-shape her CV and coach her on how to best put herself forward.

As our conversation went on, it became clear that both Michael and Liz are very resourceful.

Michael had worked two jobs in the past, and was open to considering part time work if it became available to him.

They could both think of things they owned that could be sold, and they agreed that taking in a boarder would be something they’d investigate.

Michael and Liz would rather not sell their main financial assets. In the short term, they have their safety net savings, and with some careful management of their spending, they can make that last for just over two months, if no extra money comes in in that time.

As a back-up, they decided to research the deferral and hardship provisions with their mortgage provider, and to investigate what evidence and level of hardship would be needed to withdraw any of their Kiwisaver money.

While selling the house is well down the list of steps they want to take, considering the possibility did make them see that maybe it wouldn’t be the worst thing that could happen – once you’re not tied to a particular place, other options open up.

We all tend to think that how things are today will be how they are forever. When times are good, we don’t save for bad times, because, why bother? The flip side of this is that we can become overly pessimistic when times are bad – just like Liz and her disaster scenario. But bad times are also part of the universal truth that “This too, shall pass.”

Which doesn’t mean descending into toxic positivity and insisting that everything is good all the time. Forces beyond our control can wreak havoc in our lives, and it would be unnatural not to experience grief, anger and sorrow over that.

Liz and Michael’s situation was not good when they walked into my office. The most common response to a situation like theirs is denial or panic, neither of which will help.

Through our work, they were able to get clarity about where they stood, the resources at their disposal and an action plan of steps they could take to make sure the worst didn’t happen.

Their safety net was much bigger and deeper than they had imagined.